What is a sensory processing disorder…continued!

“What is a sensory processing disorder?”   It is a condition in which an individual has difficulty processing the information coming in from the various systems. With a sensory processing disorder, one, two, or all three of the following sensory systems might be involved (as well as any of the other senses), leading to sensory modulation problems.  Sensory modulation is the ability to regulate sensory input from the various sensory systems so that a person can orient, attention can be focused, and an alert and a relaxed state can be maintained during daily routines. To better understand sensory modulation, you need to know about the following sensory systems.

Tactile System: The tactile system is the sense of touch. This is the sensory system that helps us learn about our bodies and our environment. It is important in the development of a child’s body scheme (the internal map of our body and how we use our body to interact with the world around us). This system is composed of two subsystems: (1) discriminatory- allows us to know where we are being touched, (2) protective- lets us know if we are in contact with something dangerous. Tactile input is very important for the development of fine-motor skills, visual perception skills, and articulation of sounds.

The Vestibular System: The vestibular system is the sensory system that responds to accelerated and decelerated movement. It is through the vestibular system that we learn directions and are aware of our body position in space. This input helps us to form a basic reference for all sensory experiences. This system has interconnections with many parts of the body and influences many different functions, for example, muscle tone, postural control, balance, eye and neck muscles.

An experienced therapist can evaluate and determine which systems are involved, allowing for more specific treatment planning, which leads to more effective treatment! In my next entry, I’ll share a variety of sensory activities that are alerting, calming, etc. 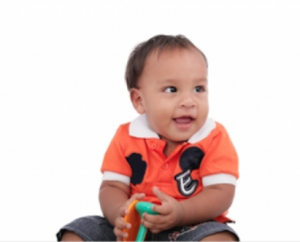 Help! My child is sensitive to touch!

Help! My child is sensitive to touch!  In this entry, I’m going to share a little about sensory defensiveness, specifically tactile defensiveness. A child with general sensory defensiveness is overly sensitive to certain types of input from the environment, such as touch, textures (including food textures), sounds, lights (usually fluorescent), smells, and movement. When someone reacts negatively to touch in particular, that is called tactile defensiveness. Remember in the last post how I briefly explained the tactile system? Well, just imagine if this system was not functioning efficiently. All sorts of problems can present themselves!

There are five sensory nerve receptors in the skin that let the central nervous system know what’s going on in the environment. These receptors are light touch (top of the skin), deep pressure, temperature (hot & cold) and pain. It is likely for one type of receptor to be overly sensitive and the other to not have a problem, which explains why some children may tolerate firm hugs, and then freak out when touched lightly. Here are some signs and symptoms that you might see with a child who is dealing with tactile defensiveness.

If a child has tactile sensitivity, here are some activities to try. Any child’s sensory system will benefit from these activities, defensive or not. Just be sure and remember to start slowly, and DO NOT force any input that your child resists. If your little one is extremely resistant, it’s probably time to consult your pediatrician and ask about the possibility of occupational therapy. There are more advanced treatments that can only be carried out under the supervision of a therapist.

Does your child dread getting a hair cut? Is it pure torture to wash your daughter’s hair? Does you son complain about the tags in the back of his clothing? If you answered yes to any of these questions, you may have a child with a Sensory Processing Disorder (SPD). Sensory Processing Disorder, also called Sensory Integration Dysfunction, occurs when someone has difficulty taking in the many sensations from the environment and integrating them in order to respond appropriately to their surroundings on a daily basis. It has been estimated that somewhere between 5 and 10% of children have sensory processing problems. However, the majority of these kids go undiagnosed because many pediatricians and other medical professionals aren’t fully educated about the condition. Fortunately the medical community is wising up on the topic, and there is even discussion about including SPD as a diagnosis in a future issue of the Diagnostic and Statistical Manual of Mental Disorders, which is the official manual put out by the American Psychiatric Association for diagnostic purposes. However, for now, the DSM-IV does not recognize SPD as an official diagnosis, which causes problems when it comes to insurance reimbursement for therapy!

In order to understand Sensory Processing Disorders, let’s begin by thinking about the five basic senses: sight, smell, taste, touch, and hearing. In addition to those, there are three additional senses: the sensory system that processes movement, the system that tells where our body parts are located in space, and the system that lets us know how we “feel” internally. As our brains receive sensory input from each separate system, that input must be interpreted, integrated, organized, and processed efficiently, so that an individual can react appropriately to the input. For example, let’s think about the haircutting example. In the case of a child with SPD, the nervous system is “wired differently” than with typical kids, so that the sensory input is not processed efficiently. Let’s think about the haircutting example. When a little boy with SPD sits in the barber’s chair, the first thing that typically happens is that a cape is place around his shoulders. If his sense of touch is involved, it’s possible that the texture of the cape will unnerve him. Then the “clippers” are turned on, and the noise that he hears is much louder and harsher to his ears than yours. In fact, to his little auditory system, the noise can actually be painful. On top of that, the barber frequently touches him and runs the comb through his hair, adding to the bombardment of negative sensory input that he’s having to endure. No wonder the little fellow hates getting a haircut!

The symptoms of SPD vary depending on which sensory systems are affected. Additional signs of dysfunction may include, but are not limited to poor sleep patterns, clumsiness, and over or under reaction to light, cold, or hot temperatures. Some children avoid certain food textures, and resist typical grooming activities such as hair washing, tooth brushing, or face washing. Many children also demonstrate an exaggerated fear of loud noises and crowds, while some little ones are extremely sensitive to touch and are fearful of playing on playground equipment. Avoiding messy materials such as play dough or finger paints and sensitivity to certain smells are also common. Children with SPD have also been described as having difficulty with transitions, and often complain about irritation from tags in the back of clothing or sensitivity to certain clothing textures. All of these issues can impact a child’s ability to interact with peers, and can ultimately lead to problems with social and play skills.

If you suspect that your child has SPD, carefully consider whether or not the issue is affecting his or her quality of life. If so, treatment should be considered. If you decide on therapy, seek out an occupational or physical therapist who has completed coursework on sensory integration theory and has experience using sensory integration techniques. Why is treatment is necessary? As children are developing, daily sensory experiences are crucial. Kids with SPD usually don’t explore their environments as typical children do, and this lack of exploration can lead to delays with gross-motor, fine-motor, and possibly speech and language skills. Through a thorough evaluation, the therapist will identify where the specific problems are, and determine the sensory input that is most appropriate for each child. During therapy, children will gain the skills needed in order to more appropriately explore and interact with the environment. An experienced therapist knows how to provide controlled input to each of the sensory systems and guide the child in making appropriate responses. It is common for the therapist to work with a little one individually in therapy on a weekly basis, as well as provide a home program to be carried out daily, or every other day. Therapy can last from several months, to several years, depending on the severity of the symptoms and how well the child responds. It is best to begin therapy at an early age, because younger children respond more readily to SPD therapy; however, this does not mean that older children will not benefit from treatment. It only means that therapy may need to be more frequent and of a longer duration.

How effective is SPD therapy? Most research on Sensory Processing Disorder treatment has been conducted through case studies, and has been found to be effective. As an occupational therapist certified to administer the Sensory Integration and Praxis Test and 18 years experience providing therapy, I agree with the research, and I believe in Sensory Processing Disorder treatment. Admittedly, more research needs to be done on Sensory Processing Disorder treatment and its effectiveness, but personally, I have seen dramatic improvement in children who have received therapy on a consistent basis. Parents frequently share stories about how therapy helped their child better tolerate basic grooming activities, which made their day-to-day routines much more tolerable, and even pleasant. Personally, I love hearing how children that once resisted playing on the playground, swinging, or going to amusement parks are now in engaging in, and enjoying these activities. The sense of relief expressed by so many parents and the smiles on the kids’ faces are proof enough for me!

For more information about SPD and some calming sensory activities click HERE to visit my other website.

Theme by Anders Noren — Up ↑